Bernie dun “Made-off” with the money!*

Wow, this has been a wild year. No less wild is the story of Bernie Madoff and his reported $50 Billion dollar Ponzi scheme.

The news media has been and will continue to be full of this story and its progress through the courts. We have been listening and reading about this and this is what we think may have happened, we got this directly out of the media, so as we learn more we may need to polish it a little,. Bernie is a little slippery.

Bernie Madoff is a master salesman. Using his reputation as a ex- head of the NASD and his firms status as a leading market maker he apparently starting taking in peoples money and promised them regular and consistent 10 to 12% returns by using his “secret knowledge skills and talents”. This is a classic “black box” which I describe in my book The Combat Wizards Guide to Working Less and Enjoying Life More Everyday which was published last year. (www.combatbusinesswizard.com)

By using his status and that of his feeder funds he was apparently able to collect vast sums of money from people who should have known better while at the same time not giving them any of the evidence or proof that they would routinely demand in even the smallest investment they would make otherwise. A confidence man like the world has never seen before.

As we all learn more, I suspect we will find that he did this by:

• Promising lower returns than others, but promising them to be smooth and consistent, it appears that the lower return promise made people feel more comfortable with the lack of disclosure and perhaps kept away those that would not take “no” for an answer when they might ask Bernie how he did it.

• He turned down business and thereby made those that invested even less likely to take their money back; as they have heard that if they asked too many questions he would return their investments and kick them out.

• By his association with old European money he got past the usual due diligence that would have detected his scheme. Nothing like names like Rothschild to open the door when it comes to the nouveau riche in the States.

• He used third parties called feeder funds to gather the assets for him, this gave the investor the impression that due diligence was being done on him and also kept his workload to hide the fraud pretty simple. He used them to build up investor confidence and keep those pesky questions away from him

All the above and probably because he started out as an honest guy as a lot of Ponzi schemes do, he was able to cultivate, maintain and grow the biggest fraud ever heard and do it to some of the worlds smartest investors (or those we thought were smart) 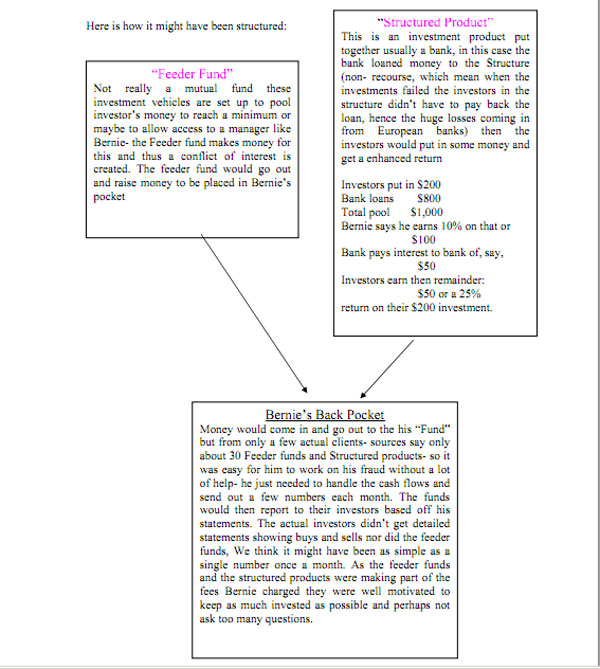 The lesson to be learned here is that greed and exclusivity sells, Mr. Madoff was selling, being an “exclusive member of a club” being that group of people who he would let invest with him on his terms . Also greed, being that 10%-12% rate of return without risk in this case, the risk of variability.

In short, there is no easy way to success only work, including due diligence, asking tough questions and putting up with varied rates of return is the way. While it’s helpful to know the right people, who can help you with work like this, it’s not the total answer.

Have a great day! And please stay away from crooks!

PS: As to the $50 billion dollar figure, I don’t think he ever had $50 billion or has stashed it somewhere, more likely, he started out honest and couldn’t deliver the 10% to 12% returns he was promising but nonetheless still told the investment pools he was earning it, and brought in enough new money to cover the money going out to people to live off of. In short the 10% to 12% he was promising but not earned compounded up to be that large number. Time and the court records will tell us more truth, Maybe Steven Spielberg whose charity was an investor will do the movie!

PSS: Actually my book from last year covered four things that relate to this situation:

“Money and Wisdom are far from the same thing” Chapter 47- this refers to his investors, most of whom were pretty rich.

There are a total of 52 of them. We are checking to see if Bernie bought a copy! Check it out at www.combatbusinesswizard.com

*Mr. Madoff has not been convicted of any crime. Nothing herein is intended to liable him in any way. All this information has been gathered from published sources and is as well as the conclusions reached, subject to change and revision.

A number of people have mentioned that they like our process of trying to keep everyone informed during these rapidly changing times using our client letters program.

Below is a list of all that we have sent, so in case you missed yours, or would like copies for your friends you can let us know and we will send you replacement copies or forward them onto your friends.

#1 The Perfect Financial Storm – How Credit Default Swaps Destroyed Trillions.
#2 What To Do Now
#3 Our Two Great Enemies in the fall of 2008, What May Save Us All!
#4 Open Letter to Hank Paulson, Dear Hank
#5 Unpredictable Times (with fantastic Davis Funds attachment)
#6 Great things To Do Now
#7 The Winner Is…..

Thanks for reading my thoughts.